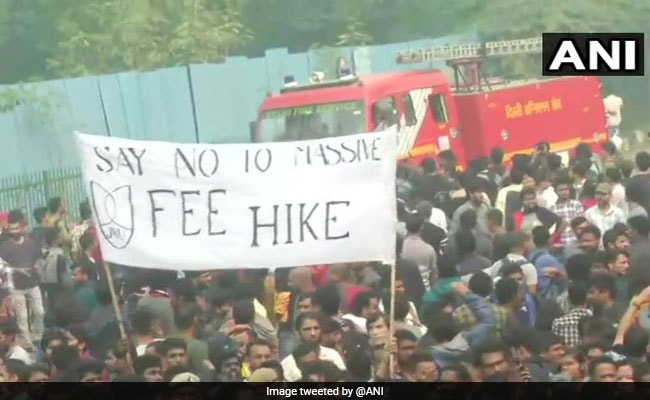 NEW DELHI: Students of country’s premier university, the Jawaharlal Nehru University (JNU), have staged mass protest against the “anti-student” policies of the administration. The protests started early morning. While one part of the agitation is against the draft hostel manual’s fee hike, dress code, etc., restrictions by the administration on entry to the Parthasarathy Rocks, attempts to lock students’ union office has also irked the Jawaharlal Nehru Students’ Union (JNUSU).

JNU has hiked the hostel, mess and security fee by a reported 400 per cent.

Meanwhile the Vice President M Venkaiah Naidu along with the Union HRD Minister Ramesh Pokhriyal ‘Nishank’ is addressing the third convocation of the University.

Students wanted to march towards the All India Council for Technical Education (AICTE), where Vice President Venkaiah Naidu is addressing convocation, but the gates have been barricaded, reported news agency PTI.

“The fee hike will affect an overwhelming number of students. It denies those from the deprived sections to avail education if they cannot pay,” JNUSU said in a statement.

JNU inter hall administration had released the draft of the new hostel manual in October. New “impositions” like five day prior permission for holding meetings, deadline or ‘curfew timing’ of 11 pm for students to return to hostels are the contentious policies that have sparked protests by the students’ union.

The union claims Vice Chancellor Mamidala Jagadesh Kumar has turned down repeated requests to meet them and discuss the issue.

On October 28, few students allegedly blocked an ambulance and stopped doctors from meeting an ailing professor on campus, following which authorities had threatened to take “severe action” against them. Condemning the incident, JNU Vice Chancellor M Jagadesh Kumar posted on Twitter, “The university administration is contemplating on a severe action against some JNU students whose conduct today has been not only unbecoming, but dangerous and shameful. This kind of behaviour by a section of JNU students is highly condemnable and outrageous.”