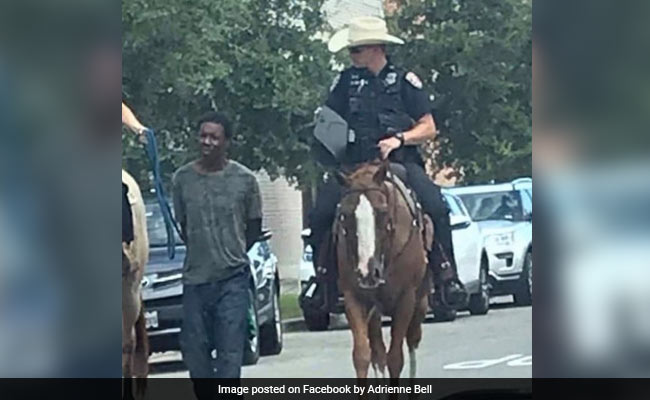 In a pair of photos, two white lawmen atop horses guide a bound black man with a rope down a wide and empty street. If it weren’t for the cars and pavement, a quick glance may lead to the conclusion that they were colorized plates from the antebellum South.

But it was Saturday in the island city Galveston, Texas, and officers arrested Brandon Neely on suspicion of criminal trespassing. They had horses and a rope, but no patrol car to take Neely away. The officers attached the blue rope onto his handcuffs, and Neely, 43, was led to a mounted officer staging area.

Bystander photos from the arrest went viral across social media, with many African Americans saying the photos were reminiscent of captured slaves in the 1800s. The outcry prompted an apology on Monday from Galveston Police Chief Vernon Hale, who called the arrest an “unnecessary embarrassment” for Neely.

“I believe our officers showed poor judgment in this instance and could have waited for a transport unit at the location of the arrest,” Hale said in a statement. The officers did not have “malicious intent,” Hale said.