“A long bull candle was formed that has filled the opening down gap of last session at 11,435 levels. Technically, this pattern is signaling a sharp comeback of bulls in the market,” Nagaraj Shetti – Technical Research Analyst, HDFC Securities told Moneycontrol.

He said Monday’s swing low of 11,311 levels could now be considered as a new higher bottom of the sequence. As per this pattern, one may expect Nifty to move up further and cross above the recent swing high of 11,572 levels in the next few sessions, according to him.

The broader markets also gained a percent while all sectoral indices closed in the green barring Nifty IT.

We have collated top 15 data points to help you spot profitable trades:

Maximum Call open interest (OI) of 29.98 lakh contracts was seen at the 11,500 strike price. This will act as a crucial resistance level for the March series.

There was hardly any Call writing seen.

Maximum Put open interest of 32.15 lakh contracts was seen at the 11,000 strike price. This will act as a crucial support level for the March series. 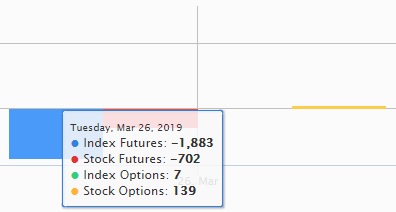 Stocks with a high delivery percentage 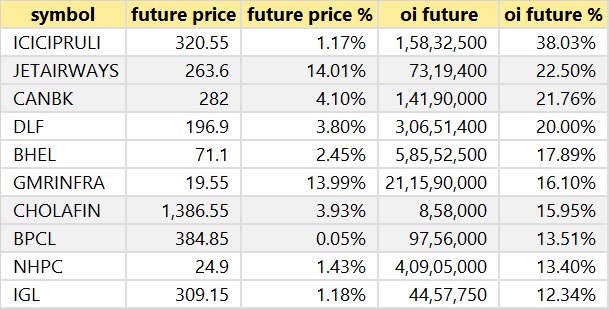 A decrease in open interest along with an increase in price mostly indicates short covering.

An increase in open interest along with a decrease in price mostly indicates a build-up of short positions. Jyoti Resins & Adhesives: Board meeting is scheduled for March 29 to consider the re-appointment of Jagdish N Patel as Chairman and Managing Director of the company.

Gujarat Natural Resources: Board meeting is scheduled for March 29 to consider and approve the appointment of Hitesh Donga as a Chief Financial Officer of the company.

Aster DM Healthcare: Meeting is scheduled to be held with Taiyo Pacific Partners on March 28 at Bangalore.

Lincoln Pharmaceuticals: Board meeting is scheduled for March 28 to consider the appointment of CFO and secretarial auditors of the company.

Mindtree: Board has decided not to proceed with buyback of equity shares of the company and has formed directors panel to evaluate L&T open offer.

Bharat Electronics: Board declared a third interim dividend of 70 paise per share of Re 1 each fully paid-up for the financial year 2018-19 and has fixed March 28 as the record date for the payment of interim dividend.

Unitech: Company successfully entered into a Share Purchase Agreement with Sterling and Wilson Private Limited for sale of entire issued and paid up share capital of Unitech Power Transmission Limited.

Securities in ban period for the next day’s trade under the F&O segment include companies in which the security has crossed 95 percent of the market-wide position limit.