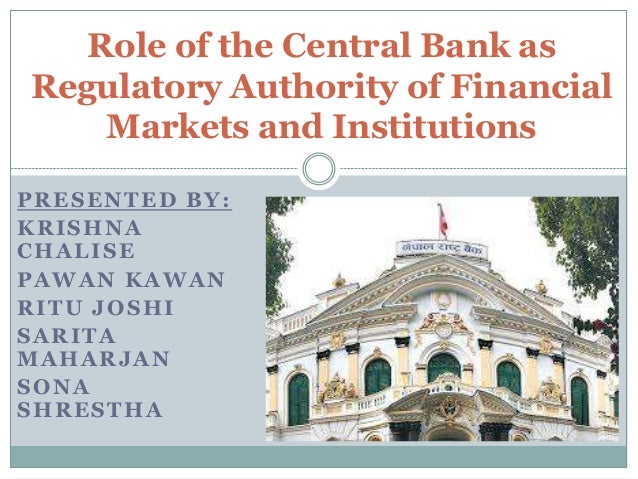 Financial stability is of paramount importance for any economy to be able to prosper. Thus, it is essential that people park their excess funds in banks and that banks are able to lend this money out to businesses which plan to use it productively. This process gets hindered when the average person loses trust in the solvency of the bank. This is where central banks step in. Central banks all over the world guarantee the deposits held by commercial banks up to a certain amount. They may do so directly or they may create a separate body backed by them, thereby insuring the deposits indirectly.

This is called deposit insurance and it indirectly helps in ensuring that the commercial banks use their deposits judiciously. Since the central bank is guaranteeing the deposits, the central bank keeps a keen eye on the utilization of the proceeds in order to minimize their own liability.

The central bank also plays an important part in the regulatory role as it decides whether or not to grant charters to new banks. In most countries around the world, charters are granted by judicial bodies and not by central banks. For instance, in the United States a banking charter can be granted either by federal authorities or by state authorities. However, the Federal Reserve cannot grant a banking charter on its own.

The central banks do play an important role in advising the judicial bodies while such charters are being granted. Therefore, indirectly central banks can have an influence over the number of new banks entering the market. This puts them in a position to ensure healthy competition that is beneficial to the consumers but not detrimental to the banks themselves.

The most important regulatory power that a central bank has is that it can modify the reserve requirements. “Reserves” is the percentage of deposits that any commercial bank has to maintain with the central bank. Thus if this percentage is increased, commercial banks have to deposit a larger portion of their money with the central bank and have a smaller percentage to lend out to the market. Hence, a scarcity of funds is created and interest rates begin to rise. On the other hand, if this reserve requirement is relaxed, banks will have more funds to lend and as a result the interest rates will go down given the abundance of funds.

It is the duty of central banks to monitor the risks that the commercial banks under their purview are taking. Therefore, central banks have the power to conduct audits at regular intervals. These audits consist of a thorough investigation of the assets, liabilities and even the treasury operations of any bank. Risk is measured using complex models like Value at Risk (VaR) which have been specifically designed for this purpose.

Commercial banks have to ensure that their risk profile is within the limits prescribed by the central banks. They also have to ensure that they have enough capital on hand to meet the needs of the depositors, if required. Without central banks regulating commercial banks, competition would drive them to excessive risk taking. It is the central banks that help maintain the balance between risk and reward even in highly competitive markets.

Central banks also enforce anti-discrimination laws to ensure that the access to money and credit is not affected by communal and racist agendas. Central banks enforce laws which make it impossible for the banks to exclude communities from the banking system. For instance, in the United States, there were allegations that banks were “redlining” certain neighborhoods. This meant that banks would not make loans to residents of certain neighborhoods. Since the majority of the residents in these neighborhoods were Hispanics or African Americans, it was considered to be discrimination.

The central bank carefully monitors the activities of commercial banks and scans them for conflict of interest. This means that if the senior officials on the boards of commercial banks are making loans to themselves or to entities controlled by them, then the central bank can and must take action to control such embezzlement. Loans which have an inherent conflict of interest have been a major reason behind the existence of non-performing assets (NPA’s) and central banks, through their regulatory functions, ensure that depositors’ money is not jeopardized by such risky and biased loans.